Multifaceted, multilingual and charismatic, MOB Bailén’s space manager, Fanny Pujol Nguyen, shares with us her day-to-day life in a coworking space and her vision of the sector.

It’s hard to describe what a coworking space manager does, simply because no day is the same within the coworking industry. But there is one skill that is critical to the job and Fanny Pujol has been proving that she has it since 2019: being the best when it comes to people and communities. Get to know Fanny and her vision of coworking in this interview.

My name is Fanny. I manage MOB Bailén and I’ve been working for MOB since the end of May 2019. About my background, to sum up, I worked in hospitality for quite a few years and I also worked with children before, and I kind of needed a change in 2019 when I came back from a trip, so I decided, ok, I’m quitting! and I’m going to look for something else. I found MOB through one of my former hostel co-workers.

Where do I start? 😅 Well, I take care of the space, of course, but I also take care of the people, I help them connect professionally or personally with other people. I promote our coworking space to potential clients, show people around the space and explain what it is, what the advantages are and what we offer. And then there are a lot of projects, collaborations and many other things like that going on all the time!

I say people and I mention diversity because I think in terms of members we have a great diversity of nationalities. And there are people who do a bit of everything, which is really nice and inspiring. So they come here and they can connect with someone who does something similar or have some knowledge about what they do and maybe find a way to not be stuck in whatever their profession is, or stuck in a project.

Compared to hospitality, our coworking clients are very friendly and it’s really exciting. MOB members are mostly freelancers, and when you’re a freelancer you offer a service, but you also have to look for clients, promote your work, have your portfolio, etc. So people are usually very curious, nice, and interested in learning new things, even if they don’t necessarily want to build their career on that new skill… They’re just interested in knowing a little bit more about different topics, which makes them even more interesting.

As always at MOB we’re changing all the furniture, and moving things around—Fanny laughs—. But in the coworking sector, I think since the pandemic a lot of people can work from home, and a lot of people now realise that working from home can also be exhausting because you eat, sleep, cook, you do everything there, and they’ve realised that it’s really hard to be in the same environment all the time.

Adding work to that can be a bit exhausting, especially for people in the creative sector. So I think people value getting out of their house and going to a coworking space, even if it wasn’t something they could have imagined themselves doing before.

And the flexibility of it: you can be a freelancer or someone who works for a company, but none of your company coworkers works from the same coworking space as you. But you still have this human feeling and this interaction with people, and you choose the people you interact with. So instead of having that coffee with that person you work with, you can go and have a coffee with another coworker who doesn’t work with you, you just share a space and it’s up to you whether you want to talk to others or not (maybe you just want a place where you can focus!) So the fact that now more people have the opportunity to work remotely, I think that’s the main thing that has changed.

Well, it depends on the day. I think I like the new MOB entrance because there’s a bit of music, people are chatting, and it’s a bit louder than inside. But it’s also less crowded. So sometimes I like to be right in the middle of everyone because it’s also nice to see other people working and people feel it’s very easy to approach you if you’re right in the middle. Plus, you see what’s going on 👀

At the moment coworking spaces are mainly in cities, there are some in smaller towns too, but I hope they will expand to more rural areas because at the end of the day, people also have this need everywhere, not only in Barcelona or New York or London, etc. Coworking brings people together, and I think that after the pandemic people have the need to come together to collaborate more, to interact more, to be inspired by others and to inspire others. So that’s what I hope for.

My favourite MOB event is the food pop-ups with the coffee shop (Café Fosc) in the frame of the “Beers in the Barrio” event, because it attracts a lot of different people, for instance, MOB members (of course) but also the public of the restaurant or bar doing the pop-up, and the regulars from Café Fosc. It just flows really well. You get a chance to try some food from a place you haven’t been to before and it’s really good. It’s also an event to relax, you don’t think about work so much and you meet new people. It’s really easy to socialise with people, plus it’s on Friday, so it’s a perfect time 🙂 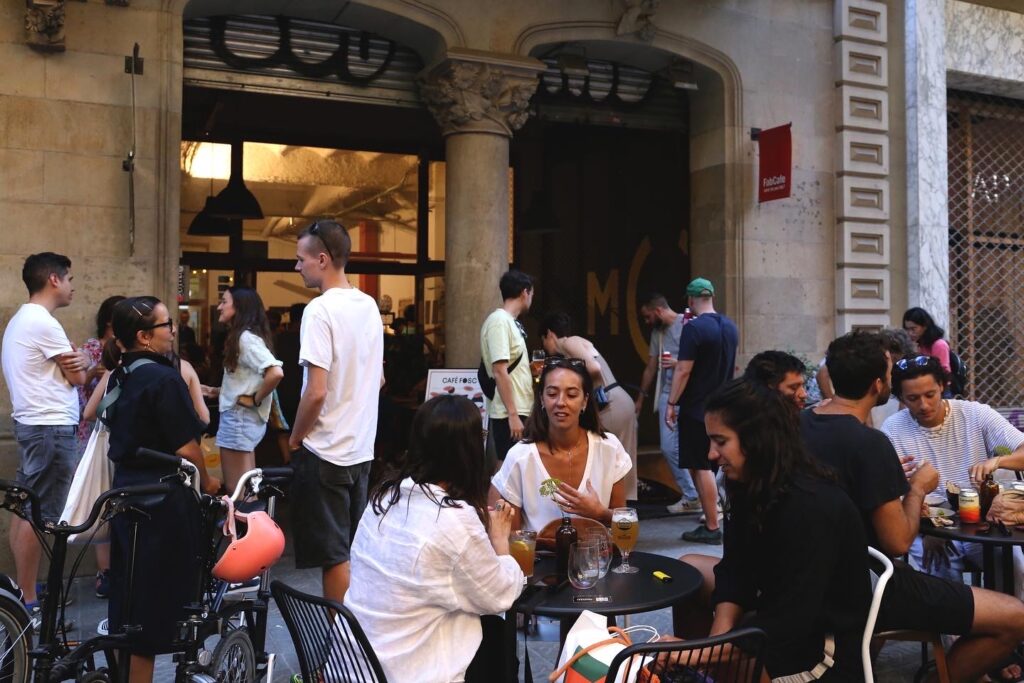 Coworking brings people together, and I think people after the pandemic have the need to come together to collaborate more, to interact more, to be inspired by others and to inspire others.

Thank you very much!